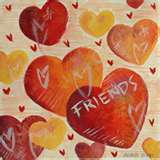 “These blogs are exceedingly charming. These kind bloggers aim to find and be friends. They are not interested in self-aggrandizement. Our hope is that when the ribbons of these prizes are cut, even more friendships are propagated. Please give more attention to these writers. Deliver this award to eight bloggers who must choose eight more and include this cleverly-written text into the body of their award.”

Many thanks to both Angela and Mary Rose who thought this blog fit the bill – but I’m left with a dilemma: Do I know eight more bloggers? By golly, I do indeed!

Lala – at The Perpetual Residence of the Lady Nomad
Penelope at Penelope’s Oasis
Melina at The Art of Being Feminine
Adrienne at Adrienne’s Catholic Corner
Penny at Argent by the Tiber
Chris at A Catholic View (and now a contributing editor at Deliberate Engagement – but I don’t think Matt would appreciate having to distract the pro-life blog with awards and pretty stuff, so I ain’t goin’ there!)
Must mention a couple of men, though:
Guy at What Women Never Hear (if you haven’t read his blog, you’re missing out!)
Owen at Luminous Miseries

Bless you all for making my life better!

I haven’t been blogging much of late – in part because of work on Deliberate Engagement. But I also have not been blogging much because it’s been that time of year when energy is depleted. Short days, grey weather, several anniversaries and a heavy personal challenge have left me without a lot to blog from.

I don’t want this blog to deteriorate into political rants. It would be easy to do, and in fact has occurred in anticipation of the November election. Others are doing a better job of that, though (although I’d like to see some of the rudeness curtailed – we need to be better than our opponents).

I think I want the blog to be like a step into a living room in a home, where we can talk about unpleasant things – but in a constructive, hopeful way. It’s not enough to complain about the horrendous decisions being made in Washington right now, if we can’t also discuss ways to counter them – and confirm to one another that we’ll help each other through the hard times coming.

It’s so easy, especially during short grey days, to just not try. “I told you so,” “Why couldn’t they see this was on the horizon when they voted in November?” and the like.

Yet this is where we watch the opposition, make our strategy, shore up our resources, and generally get dug in.

My recommendations, for what they are worth (and this is a note to myself, I admit):

1. Do not give in to the sarcastic appelations floating around in emails right now. Calling our new president “the gangsta” is as low-class and insulting as the insults of the left who made rude comments and gestures to our President Bush. Do we really want to be like them? I thought not.

2. This is the season to draw closer to the Source – in additional prayer and Bible study, study of the Catechism, of the lives and writings of the Saints. This is the time to spend weekly time before the Lord in the Blessed Sacrament (Perpetual Adoration if you have a nearby parish participating in that Devotion).

3. Practical preparation is also prudent. If we are in for a tough time, economically, begin now making plans and investing in what you need in order to become more self-sufficient. Stock up on staples (there are several threads in the FlyLady discussion forum on this topic). Simplify now so you can be more serene later.

4. Draw near to like-minded people for comfort and consolation. So the new president deleted the online prayer meeting from the White House website and replaced faith-based policies with outrageous liberal agendas. Does that stop us from praying? May this be the beginning of a groundswell of prayer such as has never been seen before in this nation! May the unity of God’s people be stronger than ever.

We got lazy during the Bush administration. The warnings were there but they were too easy to ignore.

Now we have had a wake-up call. Open your home to dinners with others who support life and sanity in the culture. Discuss how you can make a difference on the local level. Discuss your relationships with your elected officials in Washington and in your state capital – and encourage one another to contact those representatives with your desires for your state and this Nation.

Treat even our opponents with courtesy and dignity. This isn’t easy, but it’s necessary. The means we use are every bit as important as the ends we hope to achieve.

We’ll help one another get through this.

Thanks, Missy, for sharing this!

I’m with Penny on this – it matches my mood rather too well. Thanks, Penny.

only I thought it had to do with something else altogether. sigh.

Attended/Streamed the Blogs for Life conference – Tony Perkins’ Family Research Council group – this a.m., and one of the speakers said that blogs have become “old media,” in part because they’ve been adopted by the old “old media,” and that the real “new media” are to be found in Facebook and…

Okay, I’ve had a Twitter account for a while. Once in a while I actually tweet. (I’m thuch a tweet lady!) The possibilities attached to this medium for the pro-life work, though, are intriguing, so I went back to look.

I still don’t get it. I was supposed to be part of some group, but I can’t find it now. I feel as if I’m looking at a blank wall.

I went back to look at Catholic Prodigal Daughter’s enthusiastic posts about becoming a Tweetheart – they might as well be written in an alien language.

The whole world loves Twitter – and I feel an absolute twit.

Petitions are effective only where there is a verifiable signature. An official person comes to you if there’s any question about the authenticity of your participation in the petition effort, you say, “Yes, that’s my signature, I signed that petition,” or “No, that’s not mine.”

There is no comparable option in an online petition. None.

If the opposing side, the pro-aborts, even acknowledge that there has been a petition, they’ll dismiss it out of hand as a bunch of fabricated names and addresses to try to force a minority will on the nation.

No – the best, the only effective way, really, to make a difference in this fight against FOCA is to call, email and write your Congressmen and Senators and let them know personally how you feel. Some staffer will screen your contact, be it in writing or over the phone, and at the very least provide a report for his/her boss.

Is it a flawed system? Probably. But it’s the best one we’ve got.

FightFOCA’s online petition is only giving people an artificial sense of having done something constructive to oppose a noxious bill.

For other information what you can do, and how to be informed, keep up with us at Deliberate Engagement. Three weeks since the blog was discussed and the program opened – two and a half weeks since we started letting people know we exist. It’s still an amazing adventure.

(keep us in your daily prayers, please!)

Albrecht Altdorfer: The Agony in the Garden, from the monastery of St. Florian in Enns (Linz), Austria

The Agony of anticipation, knowing what was just ahead, knowing that being God would not protect him from the physical sufferings – Might He have been tempted to doubt His own identity, His ultimate victory over death in those hours of praying, alone, in the Garden, while His closest friends, who, loving Him, still did not understand, slept?

Suffering so intense that he sweated blood – yet His thoughts in those final moments before His arrest and tortures began were for us! He prayed for us in the Garden – not only “If it be Thy will, let this cup pass from me!” but also, “Be with them – make them one as we are One… Sanctify them in the truth; thy word is truth…that they may all be one, even as thouh, Father, art in me, and I in thee, that they also may be in us, so that the world may believe…”

Thanks to Mary for the link –

I love this painting. When I meditate on the First Joyful Mystery, this is the image that comes to mind.

… and (the angel) came to her and said, “Hail, full of grace, the Lord is with you!” But she was greatly troubled at the saying, and considered in her mind what sort of greeting this might be. And the angel said to her, “Do not be afraid, Mary, for you have found favor with God. And behold, you will conceive in your womb and bear a son, and you shall call his name Jesus.

He will be great, and will be called the Son of the Most High;
and the Lord God will give to him the throne of hsi father David,
and he will reign over the house of Jacob for ever;
and of his kingdom there will be no end.”